Main Page Discounts & Offers Routes & Prices Fleet
ANEK LINES was established in April 1967, under the name “Anonimi Naftiliaki Etairia Kritis SA” and trade name “ANEK LINES”. Their first shareholders were everyday men from Crete who moved frequently between Crete and Mainland Greece and wanted to travel with large and safe ships.
ANEK began operating as a passenger line in September 1970 when the company’s first ship, the unforgettable “KYDON” set sail from Chania, Crete to Piraeus. Since then, the company has engaged in an impressive course.
ANEK LINES large fleet consists of 9 privately-owned state-of-the-art vessels, of Greek ship register, that are certified as per National Safety and Quality Systems such as ISM & ISPS Systems, ΙSO & HACCP. The company is managed by a 15-member Board and employs approximately 900 people as crew and commercial administrative staff. It is registered in Chania, Crete and operates in privately-owned, state-of-the-art offices.
Through planning and scheduling, stability and power, strong focus on values and assurance towards its shareholders, ANEK LINES has established its position as the leading power in coastal shipping for more than 50 years now. The company is a key driver for economic, tourism, social and cultural development in Crete. 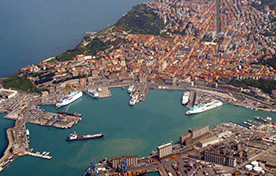 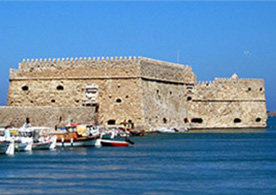 Camping on Board - Adriatic Routes

Camping on board is available from 01.04 up to 31.10. (Camping on board is not available on Italy – Corfu or v.v.). Passengers spend the entire crossing in the comfort of their own camper/caravan while taking advantage of our on board showers, WCs and 220-volt power outlets. Furthermore, they can have access to all public areas on board, such as bars, restaurants, etc. All, for the price of DECK accommodation, for the passengers and the respective vehicle fare (opendeck). The Camping on Board Service is not available on Asterion II

Infants, up to 5 years old, are traveling free. 50% discount on all Cabin categories & Aircraft-type seats (ATS). Children travelling in cabin, need to be escorted by at least one adult. Discount...
-50%

Children from 5 - 12 years old are entitled with a 50% discount. Children travelling in cabin, need to be escorted by at least one adult.
-20%

Applies on evening departures, for passenger and private vehicles when outbound and inbound tickets are issued simultaneously. Applies also on combined round trips on Crete routes (from/to Chania and...
3+1

For 4 people, 1 travels for free in the same 4-bed cabin, with a single reservation code. Require two tickets to have a full fare. Subject to availability. Partial cancellation of tickets is not...